If you are a fan of the Angry Birds game then you are definitely going to like this game too. Angry Birds Space is a fun game in which you get the chance to test your knowledge of space and gravitation to destroy the pigs and their defenses. You have seen angry birds smashing the pigs on Earth but now the pigs have flown away into space and you along with the birds have to follow them there. With the battle between the birds and the pigs shifting to space, the challenges have multiplied. You now have to be very careful about the gravitational forces at play when trying to take out the pigs. 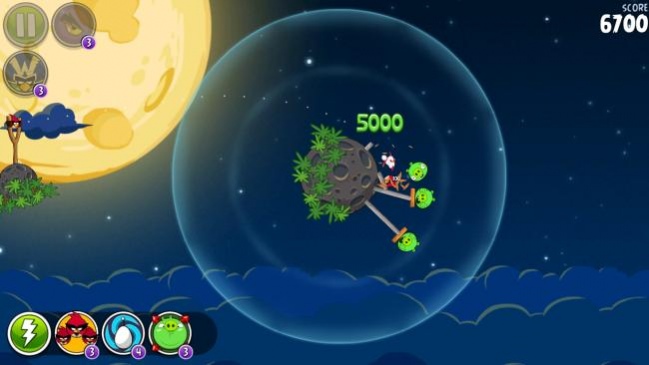 Angry Birds Space has an addictive gameplay and can keep you hooked for hours and hours. The stunning and detailed graphics that can be seen in the background in each level of this game make playing it a visual treat. While many things have changed, the controls of this new version of angry birds remain as easy as they were before. You simply have to pull back the band of the catapult and throw the birds towards the pigs and their towers. You can add force to the throw by pulling the band further back before throwing and give direction to it by moving the band upwards or downwards.

In Angry Birds Space, you will find a new set of birds that have different powers than the ones you saw in the previous versions of angry birds. The different birds are identified by their size and color as was that case in previous editions of the game. You can activate the special power of each type of bird by tapping on the screen with your finger after the bird has been released from the catapult. Angry Birds Space provides as many as 13 planets on which you can play the game which includes the solar system as well. Each planet is like an episode in which there are various levels available. 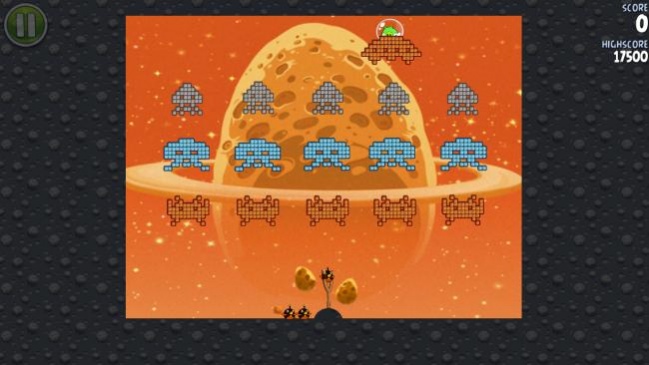 The levels of Angry Birds Space are quite challenging as you have to take into account a number of things when targeting the pigs. You need to consider the gravitational forces of the planets in addition to the force and direction at which the birds have to be thrown to deal the maximum damage to the pigs. The levels in this version of angry birds become increasingly challenging. So, in order to help you in clearing them, the game offers power-ups. These power-ups aid you in completing the level but also in increasing your score as well. You are provided a limited number of power-ups only. The power-ups can be gained by viewing video advertisements or bought using real money.

There are hidden bonus levels available in Angry Birds Space as well. These levels can be unlocked by gaining three stars in all the levels located on a single page. In addition to this, you can unlock game content by clearing daily missions as well which are renewed after every 24 hours.

Angry Birds Space is a gaming app which is aimed towards people who like playing games that require the use of logic and scientific know how. It provides them the chance to target pigs and take them out while destroying their defenses by using birds having various unique powers. The combination of stunning visuals, good game mechanics and addictive gameplay makes it a fun game to have on your Smartphone.


Tell us your experience with Angry Birds Space 2.2.14

RELATED PROGRAMS
Our Recommendations
Angry Birds Space HD    FREE
The #1 mobile game of all time blasts off into space! Play over 300 interstellar levels across 10 planets – including our very own Solar System! Whether it’s the icy orbs of Cold Cuts, the volcanic explosiveness of Red...
Continue to app

Rating:
Angry Birds Space Premium    TRIAL
The #1 mobile game of all time blasts off into space! Play over 300 interstellar levels across 10 planets – including our very own Solar System! Whether it’s the icy orbs of Cold Cuts, the volcanic explosiveness of Red...
Continue to app

Rating:
Angry Birds Space    TRIAL
The #1 mobile game of all time blasts off into space! Play over 300 interstellar levels across 10 planets including our very own Solar System! Whether it s the icy orbs of Cold Cuts, the volcanic explosiveness of Red...
Continue to app